Headquartered in Santa Barbara, in the surfing paradise that is the state of California, Channel Islands Surfboards represents one of the best surfboard manufacturers in the world today.

Channel Islands is in the league of the oldest surfboard shapers still in business having begun operations in 1969.

The driving force behind the company’s success is greatly attributed to its star studded team that includes some of the best surfers on the globe, including the infamous, surf alien himself – Kelly Slater.

This has allowed the company to produce high performance surfboards that fill the needs of these pro riders.

The original brains behind Channel Islands surfboards is none other than pro shaper Al Merrick and since July 2006 the company has been owned by the Burton Corporation. This was a necessary change that helped the company focus on providing high quality, rider driven surfboards. 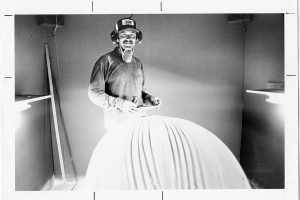 Long ago there was a man by the name of Al Merrick who loved surfboarding. Over time he started designing some of the most innovative boards surfing has ever seen. Nowadays he has a full line of channel islands surfboards, which are considered as popular as they come. In fact, most of the world's top surfers utilize Merrick's boards.

Born in New Jersey, Al Merrick moved with his parents to Florida, and eventually to California. He started surfing by the age of ten and utilized his years of experience to build the channel islands surfboards.

During his high school days he was sponsored by Surfboards Hawaii and actually helped shape the noserider surfboard. After graduating he attended Palomar College, but only for a short period of time. He realized that shaping surfboards is what he wanted to do.

He was also a big fan of another surfboard shaper (John Price), which pushed Al Merrick to shape surfboards full time. Plus the shift from longboards to shortboards motivated him even more. Over time he created Channel Islands Surfboards and brought something new to surfers around the world.

Then again, when George Greenough and Bob McTavish tested revolutionary surfboards for months it fueled his passion tremendously. This was around the time he relocated to the Santa Barbara, California area and dedicated the rest of his life to shaping surfboards.

The funny thing was he wasn't well known at this time. In fact, even when Shaun Tomson used an Al Merrick surfboard to win the 1977 world title of surfing he still didn't become popular. It wasn't until he teamed up with surfer Tom Curren in 1982 that everything started to changed. This was the same year channel islands surfboards were launched.

Shortly thereafter, Curren became one of the biggest surfing icons ever. This brought tons of popularity to Al Merrick and his channel islands surfboards as well. Everyone wanted to copy Curren's style, which included purchasing the same type of surfboard he used.

Over the years he has helped some of the world's best surfers like; Taylor Knox, Kelly Slater and Lisa Anderson. There are several others as well, and if the truth be told, everyone who was anyone seemed to dawn a board that was shaped by Al Merrick.

Some 45 years later the channel islands surfboards are still going strong. Even though Al Merrick himself isn't doing everything himself, his son has taken over the reigns of the company. This just lets us know that the next generation will have plenty of new innovations, especially since the designs are done by computer. In the end, the future looks bright for channel islands surfboards.

Among surfboard shapers, few can boast the wide range of surfboard models that this surfboard manufacturer has.

Overall, Channel Islands Surfboards has more than thirty board models allowing you to buy a surfboard based on intended use, personal capability and budget.

If you are a competitive surfer you can choose from one of Channel Islands many pro surfboard models.

These include models designed around the input of Rob Machado, Taylor Knox, Tim Curran, Dane Reynolds and Kelly Slater.

There are also a number of surfboard models designed for beginner and intermediate surfers looking to take their surfing to the next level.

Below is a list of models offered by Channel Islands…

The Channel Islands Motor Boat Too or “Too” is a supercharged version of Rob Machado’s original Motorboat. With more tail and deck rocker, this new model is great for surfing in the pocket and going at sections.

Yadin Nicol inspired, the Channel Islands Weirdo Ripper is an all-around board that excels in small to medium size surf.

Channel Islands New Flyer Surfboard is the new shape for the popular Flyer model. This 2013 Flyer is shorter and wider than the old Flyer with spiral vee in the tail, allowing for quick tight turns.

The Channel Islands DFR surfboard is an ultra modern surfboard design by team rider Dane Reynolds. The DFR stands for “Dane Freaking Reynolds” and this surfboard model allows for both big airs and heavy carves.

The Channel Islands Sperm Whale Surfboard is probably the weirdest shaped surfboard in Al’s lineup. Apparently this board was entire shaped by Dane Reynold’s and it not meant for everyone.

The Fred Rubble Surfboard is designed with young surfer Conner Coffin. It’s a very unique surfboard with lower entry rocker and a wider outine. A fun board for waist high to a little over head waves. Learn more about The Channel Islands Fred Rubble surfboard

The Dagger by Channel Islands Surfboards is designed with Taylor Knox and features an outline inspired by Curren. This board came about because Knox wanted to loosen up his small wave surfing.

Slightly shorter and a wider nose and tail than your regular shortboard, The Remix is a very new school Channel islands surfboard.

The Cheese Stick by Yadin Nicol is his board for the WQS tour. This board features the trendy shorter length and wider nose and tail.

The shortboard that Kelly Slater promoted by rocking a head band with the board’s logo on it, the Channel Islands Semi Pro is Slaters work of art. This surfboard was redesigned by Kelly from start to finish.

The Gravy Channel Islands Surfboard is a new design by Al Merrick and Rob Machado made for having fun in small waves.

The Dumpster Diver surfboard model is Dane Reynolds request for a short wide surfboard with a single concave. He rode this one to his first WCT final!

Designed by Kelly Slater, the Wizard Sleeve is a surfboard that is meant to feel like there is nothing under your feet!

For the powerful surfers, like The Gudauskas brothers, the Channel Islands Rookie Surfboard is designed around state-of-art surfing.

The Channel Islands Whip Surfboard is a reworked version of the The Flyer model by Kelly Slater and Al.

This is the pro surfboard model designed with Taylor Knox. This board is for you if you want to surf like Taylor does – or maybe just surf better than you do now!

The Channel Islands Robber Surfboard model is a fun, short, wide surfboard from the mind of Rob Machado.

This deep single concave surfboard, The Proton is Channel Islands pro surfboard model designed with the input of Dane Reynolds.

Another design inspired by Rob Machado, The Channel Islands Biscuit Surfboard is a stubby thruster design for small wave surfing.

The Channel Islands M13 Surfboard is a hybrid by Al Merrick that will paddle like a funshape but ride like a shortboard.

The Red Beauty model by Channel Islands Surfboards is modeled after the OP Pro winning surfboard ridden by Tom Curren.

The Black beauty is a replica of Tom Curren’s world title winning surfboard.

The MBM+ The MBM+ is the surfboard model that Nathaniel Curran rode when he won the US Open.

The Big Willy Surfboard is designed with the larger, heavier surfers in mind and is modelled after rider Willy Morris.

A traditional fish design, Even Keel is a Channel Islands surfboard designed in collaboration with Joe Curren.

The Channel Islands Flyer Surfboard is one of best selling models designed for small waves.

Another version of the Flyer model, the Flyer II is a full railed, small wave surfboard.

The M4 surfboard is designed to be surfed in small to medium sized surf and is one of Channel Islands most forgiving models.

Inspired by Kelly Slater, The Pod is designed to fly!

"While no singular design or manufacturing first can seemingly be credited to Al Merrick, the founder of Channel Islands Surfboards has been more influential to surfers and surfboard designers than any single person over the last quarter century. Merrick was already a skilled and accomplished board builder when Simon Anderson’s Thruster came along. With California prodigy Tom Curren, and a bevy of other talented surfers, he was able to jump on this design and take it to new heights. We were all watching, including Kelly Slater. Under Slater’s feet, Merrick refined this design and took the rest of us along with him as he pushed into a bold new realm of minimalistic, precise, high-performance surfboards. Kelly Slater is the most influential surfer of our time, and he has done the vast majority of his surfing on boards built by Al Merrick. You do the math."