Few surfers would be surprised to learn that Lost Surfboards is the largest manufacturer of surfboards in the United States.

And in such a competitive and fast-evolving industry, such a feat cannot be a fluke and has taken years of consistent delivery, effort, quality and market-awareness for Lost Surfboards to take its place among the greats surfboard manufacturers.

It has taken a combination of innovation, employment of cutting edge technology, a seamless supply chain and a focus on customer needs for the brand to get to where it is today.

It is also very important to mention Lost Enterprises' raw approach to showing the world ‘What's Really Going On' in the surf world and dismissing the false view that the boom of competitive surfing has caused.

The History of Lost Surfboards 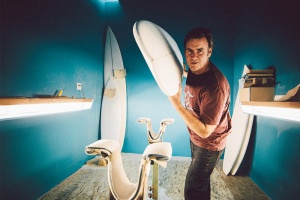 Lost began in 1985 when Matt Biolos and a bunch of school friends were into snowboarding at Mt. Baldy, skateboarding at the Pipeline in Upland, and surfing in Dana Point. They weren't too worried about winning this football game or that contest. They were "team lost". Thus the name ...lost scribbled on books, t-shirts, benches, tables and eventually clothing.

Matt Biolos began sanding surfboards at Surfglas and Herbie Fletcher Surf Shop fresh out of high school in 1987. He made his first surfboard at this time and called it a Ratz Ass like in I don't give a ...... His second surfboard was labelled mayhem- obviously not taking things very seriously. (Mayhem Ordinance was Matt's high school music band). This name "Mayhem", for better or for worse, stuck. Matt shaped 20 boards the first year. Not too many people were ordering boards from Matt yet, so to make money he continued to sand surfboards and began to paint designs on them along with a handwritten LOST wherever he could. Surfers like Christian Fletcher and Matt Archbold were getting Biolos paint jobs. By working in an environment with master shapers (Timmy Patterson, Jim Fuller, Terry Senate, Randy Sleigh to name a few) and good surfers, he was able to develop as a shaper.

Matt's friends had been telling him for years to put the word Lost and his art on tees and try to sell them. By 1992, fueled in part by a suggestions from Timmy Patterson and Johnny Monson, Matt began putting his art on T-Shirts with a ...LOST logo. His roommate Mike Reola , a recent business school graduate, helped him handle the business side of things and they both worked on developing a plan to slowly grow and market the company with little or no money. This included help from numerous friends in the form of small loans, work in exchange for a couch to stay on, a parent's back yard to dye tee shirts, or a vehicle in exchange for rent. Some of these people (although not a complete list by any means) were Aaron Strand, Chad Godett, Max McGhee, Joe Rich, Jason Kenworthy, Ryan Divel, Jimmy Nudo, Matt Reola, Bill Woodcock, Tonan, Ramos and PR, Paul Berton, Matt "Chicken" Willey, Bill VanDenBerg, and Kawika Urso.

At this time Matt was producing about 500 Mayhem Surfboards a year and had guys like Strider Wasilewski and Christian Fletcher riding them. In 1993 Lost made its first video, titled Momentum 3, which showcased the fledgling surf, skate and snowboard teams along with everyone who lived at the Lost House. The video was renamed Dysfunctional after almost being sued by Taylor Steele. The video was meant to be a joke and only for their friends, but its popularity led them to produce their first real video titled Whats Really Goin On in 1995.

At the same time, Mike and Matt were learning to make clothes. Neither had any experience whatsoever. (Matt had screenprinted a few Lost and Mayhem tees in High School). After a few disappointing t-shirt runs with hand presses, they walked into the monstrous Gotcha building (not knowing anyone) and Captain Jack Little offered to do the screenprinting BEFORE 6AM when the Gotcha stuff had to start. Next they figured out how to get patterns made, samples made, then find the best place to sew them up. Lost made trunks, shorts, pants, hats, jackets, and light snowboard outerwear.

In 1996, Lawrance Quigley came to them and offered to head up the design and production of the clothing – except for the t-shirts. Squigs knew who was the best at making each piece and could get it done very quickly. The Lost clothing line went from 10 pieces to 30 pieces overnight.

In 1993 Lost hired its first team rider – skateboarder and current skate team manager Chad Shetler. In 1994 Lost hired Chris Ward, its first pro team rider (Chris was 15!), closely followed by Justin Matteson. In 1996 when another clothing company came along and offered Chris Ward six figures to break his contract, Lost surfboards was born. ...Lost was now Chris' surfboard sponsor. Since those early days, Chris has grown into one of the most interesting surfers in the world. Today ...Lost continues to support skate and surf athletes and events as well as snowboarding and other sports. Matt and Mike, while running the company with partner Joel Cooper, continue to oversee all marketing and product.

The original ...Lost house had the original ...Lost ramp out back and ...Lost Enterprises was operated out of the living room. This lasted until the house was condemned in 1996. The old Dewey's TV warehouse in downtown San Clemente became the new Lost clothing warehouse and headquarters, as well as the home for ...Lost surfboards, until they moved to a location off of Pico in San Clemente in 2009. The clothing company outgrew three more warehouses and now is located off Jamboree in Irvine Ca complete with indoor skatepark.

We could say "Since those wild beginnings, ...Lost has spread slowly across the world. The Company has matured internally but continues to run off the same philosophy it started with. The Lost thinking now flows through its art, music, films, athletes and clothing" ...but that sounds like some PR firm wrote that for us. So ...Lost is whatever you think it is...

We could say “Since those wild beginnings, …Lost has spread slowly across the world. The Company has matured internally but continues to run off the same philosophy it started with. The Lost thinking now flows through its art, music, films, athletes and clothing” …but that sounds like some PR firm wrote that for us. So …Lost is whatever you think it is."

When referring to Lost Surfboards, drab and boring are certainly not terms you will be inclined to use.

Perhaps one of the most appealing and unique aspects of these surfboards has been the diversity of board colors and visual designs. This has been achieved through an incredible team of famous surfboard graphic artists including Sean Spoto and Drew Brophy .

The uniqueness of Lost surfboards also shines true through their variety of surfboard shapes and models.

These models include the Round Nose Fish, the 5 Fin Shark, the Speed Demon, the radical Psycho Ward surfboard, and the fast and easy-to-maneuver F-1 board.

Below is a list of the surfboard models offered by Lost Mayhem Surfboards.

The Scorcher Lost Surfboard is a new design for 2010 that was designed for team rider Kolohe Andino, son of surfer Dino Andino. This surfboard design won Kolohe 3 NSSA titles in 2009.

The F1 Lost Surfboard was designed with the high performance of Formula 1 race cars in mind.These surfboards are meant to be surfed fast and turned sharp!

The Stealth Lost Surfboard is Lost's way of hiding their popular Rocket surfboard model in a more high performance shape so that their team riders had a secret weapon to use in contests. So if you want a high performance shortboard that surfs with the speed of a fish surfboard, this is the lost model for you.

The Speed Demon 2 Lost Surfboard is the manufacturer's best selling model of all time and is the most popular surfboard model in the world.

This board is loved by surfers of all sizes and is the best Lost surfboard model if you want to be guaranteed a forgiving, high performance surfboard that you will love!

The Speed Demon 3 Lost model for 2009 is a fine tuned version of the 2006 model with an updated rock and bottom contours.

This has been Lost's "go to" surfboard for first time custom orders.

The SD-LUX is the newest addition to Lost Surfboards' Speed Demon Series. This surfboard model is very user friendly with a conservative outline and strong impact and crack resistant glassing.

This surfboard is built for the discerning surfer.

Lost Surfboard's most successful new surfboard model, The Rocket is a surfboard that you can ride in small to average sized waves like you would surf any board in perfect conditions.

Not much needs to be said about Chris Ward's pro model, The Psycho Ward. This is the Lost surfboard model ordered by most of the company's WQS and WCT surfers.

So if you want to surf like Wardo quit wasting time!

The Deal is Shane Beschen's pro model surfboard that combines the designs of surfboards that have worked for Shane in the past, providing you with what you need to surf like Beschen does.

The Whiplash Lost Surfboard is the surfboard model loved the most by the Lost Team pro surfers. These surfboards are the most responsive boards Lost offers featuring very low volume and deep concaves.

Lee Stacey is an Australian shaper who Matt Biolos has teamed up with. Lee Stacey's S3 Lost Surfboard model is an all rounder board designed for all surfers in all conditions.

This surfboard model has been team rider Luke Stedman's favourite board for the wide range of waves on the WCT.

5 Fin Shark Lost Surfboard If you need one surfboard that you wish to surf in any condition then the 5 Fin Shark is for you.

You can ride this board as a Quad in sloppy surf and then switch it to a thruster when the waves start to go off!

The Round Nosh Fish by Lost is the world's best selling fish model. So if you are looking for the ultimate fish that paddles great, goes fast and makes you look good then this is it.

This Lost Fish Surfboard is faster and better in small surf than the standard Round Nose Fish.

These Lost Fish Surfboards are replicas of the Round Nose Fish made famous by Cory Lopex, Chris Ward and Andy Irons in the classic Lost Film 5'5″ x 19 1/4″.

The Gullwing Lost Surfboard is a 5 fin surfboard that combines the features of the Round Nose Fish and the Lost Rocket to create a surfboard that is perfect for the heavier surfers.

The Monkfish is a high volume surfboard design influenced by the old school MR retro boards. These Lost Surfboards are great for surfers who surf small choppy waves often.

The Glider is a shortboard fish hybrid by Lost that has a curvy outline with added length, allowing it to work great in overhead crowded surf.

Lost also offers Step Up and Mini Guns for the big wave surfers at heart. If you are a charger and love the Lost surfboard brand then these boards are for you.

Lost Surfboards specializes in shaping shortboards. A lot of them. Along with shaping, Lost offers different types of board art and designs available as well.